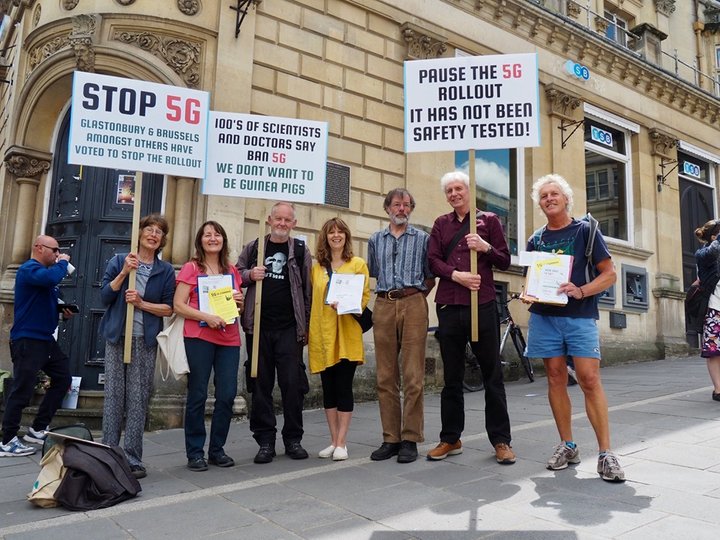 “Until there is a consensus that 5G wireless radiation is harmless to humans and the environment, Frome Town Council adopts the precautionary principle and opposes the roll out 5G in the town.”

The campaign group were delighted with the vote 9-4 for in favour on July 17th 2019.

How we did it

The campaign began in March, with biweekly meetings where a small group organised the printing of some leaflets. A team of three delivered house to house and on car windscreens in the hospital and supermarket car parks. A space for a talk was kindly offered by the Cornerhouse pub. We put up posters on notice boards in the town and on the huge monopole lamppost outside the hospital advertising the talk.

We set up a petition online 38degrees and printed it out and put this up on Facebook.

We invited all the local councillors, three attended including the Deputy Mayor.

The talk aimed to share the basics of what 5G is and why an exponential increase in radiation whilst there is already so much evidence of harm from 4G pulsed non ionising radiation is reason enough to at the very least slow down and invoke the precautionary principle.  The atmosphere was calm, friendly, soft chairs, lots of home-grown flowers in vases on all the tables. It lasted about half an hour and then we opened up to questions and contributions from the floor. It was interesting as some people came expressing relief and gratitude for the opportunity to talk about the subject, others genuinely didn’t know anything about the topic.  There was a wee bit of heckling from two people at the beginning which was met by a helpful audience member reminding them firmly they were asked to save questions until the end.

We had Dr Martin Palls report printed out in full on the table and the Phire leaflets. This was helpful for those who wanted to know “Is this fake science?”

We did several mornings in the Town centre with banners collecting signatures. We invited a journalist and he put a piece in the Frome Times.  We then held a second talk at another venue in Town. Again the Deputy Mayor attended and despite one of the speakers veering into the more negative conspiracy angle despite being asked not and being somewhat insulting to her she reported that the Council  had raised the Precautionary Principle and it would be voted on at Full Council on July 17th.

We are thankful for all the work done in Glastonbury to secure the result there as this very much helped sway the decision in Frome.